Epidemiology and aetiology of canine Leishmaniasis

Canine Leishmaniasis is a vector disease caused by protozoas of the Leishmania genus which affects dogs on all continents except Oceania. The aetiological agent of visceral and cutaneous Leishmaniasis in dogs and humans in countries in Southern Europe is Leishmania infantum (synonym Leishmania chagasi). Canine Leishmaniasis occurs in approximately fifty countries in the world, with a particularly high prevalence in the Mediterranean region and in regions of South America. It is significant that the epidemic is spreading northwards in Europe and in America, where it has spread from Brazil to Argentina and some states in the middle and north east of the USA (Solano-Gallego et al, 2009, Petersen 2009, Maroli et al, 2008).

Canine Leishmaniasis is a very significant disease because of its impact on veterinary medicine as well as on human health. In the European Union, for example in Spain, cases of human leishmaniasis are still being reported every year.

Human leishmaniasis Europe has a complex epidemiology. Many animals, domestic and wild, act as reservoirs, but dogs present all the characteristics of an excellent reservoir according to the WHO definition (chronic infection with a prolonged subclinical phase, accessible to the vector, with close contact with humans).

Leishmania is a diphasic parasite which completes its life cycle in two hosts, a phlebotomus diptera which accommodates the flagellated form known as the promastigote and a mammal in which the non-flagellated intracellular form known as amastigote develops. The terminal promastigote or metacyclic promastigote is transmitted by the sandfly to a new mammal host, completing the biological cycle of the parasite. Sandflies live in plentiful biotopes in organic matter and humidity. Their activity is functionally crepuscular and only the females are haematophagous.

Once the Leishmania parasite is located in the dermis of the host, it is absorbed by tissue macrophages. From this point, the progression of the infection depends mainly on the efficiency of the immune response of the host (Alvar et al, 2004). If the dog is able to develop an effective immune response, the infection is controlled and the dog remains infected but does not develop clinical signs or lesions (subclinical infection). On the other hand, when the dog develops an immune response which is not effective, the infection progresses and the dog develops the classical signs of the disease. Canine Leishmaniasis is therefore a disease where infection is not synonymous with clinical disease (Solano-Gallego et al, 2001; Baneth et al, 2008). 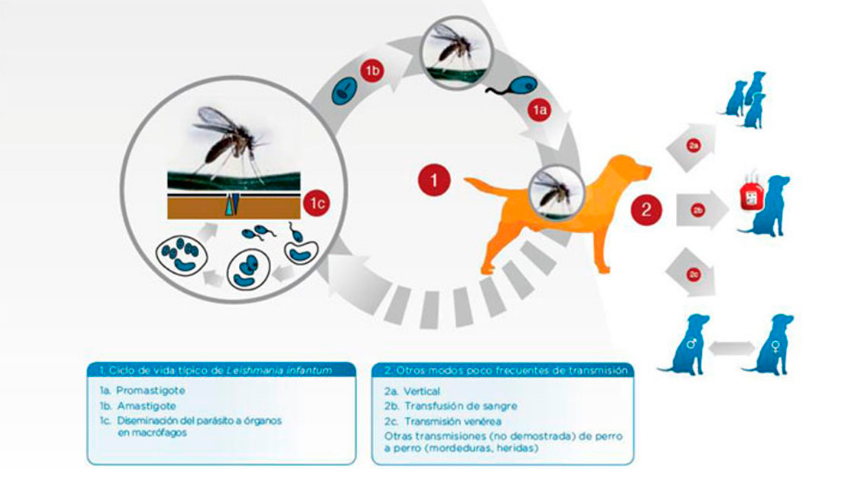